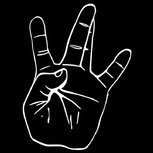 Going to date myself with this one but...

Remember this: If a person has NO REASON to think you did something, but he accuses you anyway, it's because he did it or would do it... Somebody once pointed at me and started screaming that I w