Really not drawn much 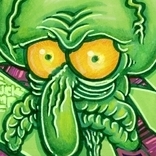 My apologies that some of these are reposted, but I just got a new scanner up and running and wanted to get proper scans not the shitty Instagram reposts.